How Organic Farming Benefits the Environment 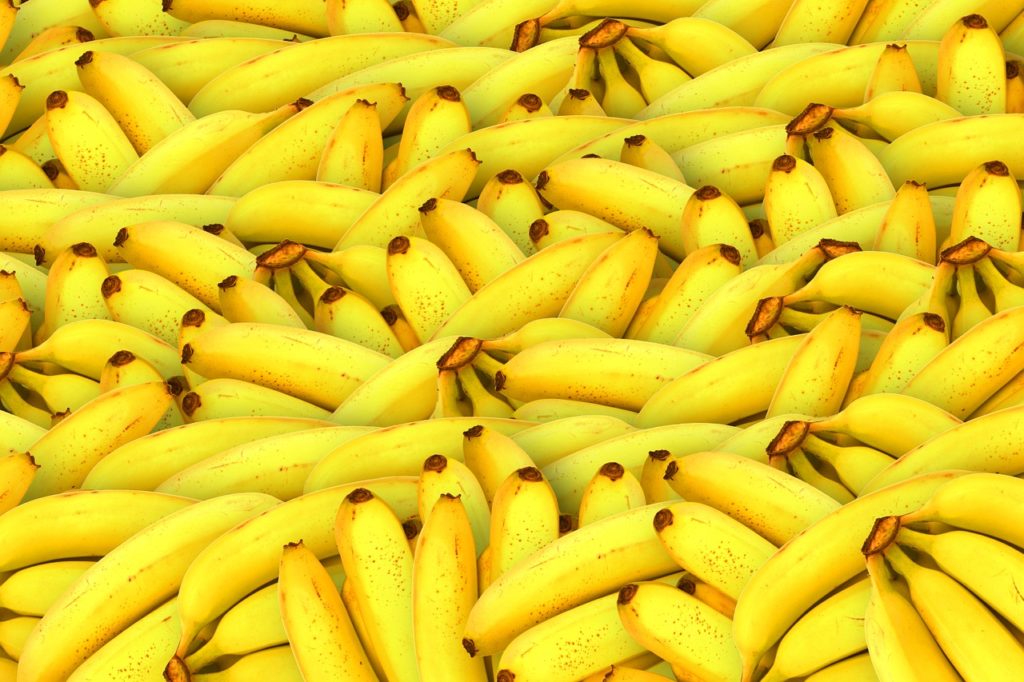 We have all heard whisperings of the benefits of eating organic food. Most people have a general understanding that organic products and produce are better for your health even if they don’t buy them regularly. There is another side to this conversation however that doesn’t always get the attention it deserves: the environmental impact organic farming has. We are taking a look at some of the biggest issues facing our environment today and shedding some light on how organic farming alleviates aspects of these problems.

A lot of people immediately think of cars and oil fracking when it comes to global warming. This isn’t an uncommon jump, but it doesn’t fully paint the picture and is too simple of an answer for this complex situation. To understand this problem, you need to be familiar with The Greenhouse Effect. In essence this is a concept based on a surplus of atmosphere gasses like carbon dioxide, methane, and nitrogen. These are all produced by nature and small controlled amounts of them are actually necessary for the health of the planet. The problem is that the amount we are producing far exceeds what is needed and excess amounts are trapped in our atmosphere. This leads to solar heat being trapped and an overall heating of the planet.

So Where Does Organic Farming Come In?

When we are talking about these harmful amounts of atmospheric gasses a solution that is often presented is organic farming. This may seem like an odd answer but it all comes back to the soil. You see, soil is far more powerful and amazing than many of us think. It is in and of itself an entire ecosystem rich in minerals, microorganisms, and countless other manners of life. The amazing part about soil is that when it is healthy every foot of it contains billions of bacteria that can effectively reduce global carbon levels. There is nothing additional needed, they will do this simply because that is their makeup.

A simplified explanation on how this bacteria works is that the soil breaks down and converts organic matter into cellular material. Basically, they use the carbon to make more of themselves. The amazing part is that while these microorganisms are doing this, they are using the carbon as a “building block” and storing it deep down in the ground. This means far less carbon in our atmosphere, and therefore less solar heat being trapped. This bacteria will also cycle nitrogen in and out of plant life, resulting in nutritional and healthy plants for us to eat.

Why The Soil Has To Be Organic

Before modern farming practices became the norm, soil did an excellent job in keeping carbon levels balanced in the atmosphere. With the rise of harmful pesticides and chemical sprays however, the soil has lost its ability to sustain microscopic life and in turn cannot absorb atmospheric gasses the same way.

Research has been done extensively on this subject and the finding continue to present organic farming as a solution to global warming. In a 26 year long independent study done by The Rodale Institute they claim that we could not only stop the effects of global warming but also begin reversing it:

“We could sequester more than 100% of current annual CO2 emissions with a switch to widely available and inexpensive organic management practices, which we term ‘regenerative organic agriculture. These practices work to maximize carbon fixation while minimizing the loss of that carbon once returned to the soil, reversing the greenhouse effect.”

Another huge benefit of organic farming is combating erosion. Not only does organic farming build healthy soil, but it helps combat serious soil and land issues, such as erosion. Soil building practices such as crop rotations, inter-cropping, symbiotic associations, cover crops, organic fertilizers and minimum tillage are central to organic practices. These practices improve soil formation and structure and creating more stable systems. In turn, nutrient and energy cycling is increased and the retentive abilities of the soil for nutrients and water are enhanced. These techniques play an important role in soil erosion control. The length of time that the soil is exposed to erosive forces is decreased, soil biodiversity is increased, and nutrient losses are reduced, helping to maintain and enhance soil productivity.

Access to clean and healthy water is an essential for any human being. Globally there has been an increasing water supply crisis, putting the health of people, animals, and our planet at risk. In the United States, a large water pollution issue is the river runoffs from non-organic farms. This water carries harmful pesticides, animal waste, and toxic fertilizers. Organic farming decreases these risks drastically due to the natural products and fertilizers used. Well managed organic systems with better nutrient retentive abilities, greatly reduce the risk of groundwater pollution. In both France and Germany, where pollution is a real problem, conversion to organic agriculture is highly encouraged as a restorative measure. Organic farming also uses far less water than modern farming techniques. Because organic farms tend to spend more time on amending soil and using mulch- they generally use far less water.

Your Role and Responsibility In This Issue

The health benefits to eating organically are immense, but the environmental impact is just as important. Unless you own a farm or are in the agricultural industry, chances are you aren’t going to have a direct hand in organic farming. That is perfectly fine and there are countless other ways you can support these natural farming practices. The best way to have an impact? Buy your food from organic farms. It truly is that simple.

Being a conscious consumer is more important now than it ever has been before. Take some time to look into the farming practices of the companies you are supporting with your business, and be sure that they morally align with your views. At Organics Unlimited we are dedicated to producing the best organic bananas and tropical fruits with the highest respect and care to our environment, communities, and customers. Read more about our sustainable organic farming practices and know that you are helping the environment each time you eat one of our delicious fruits. 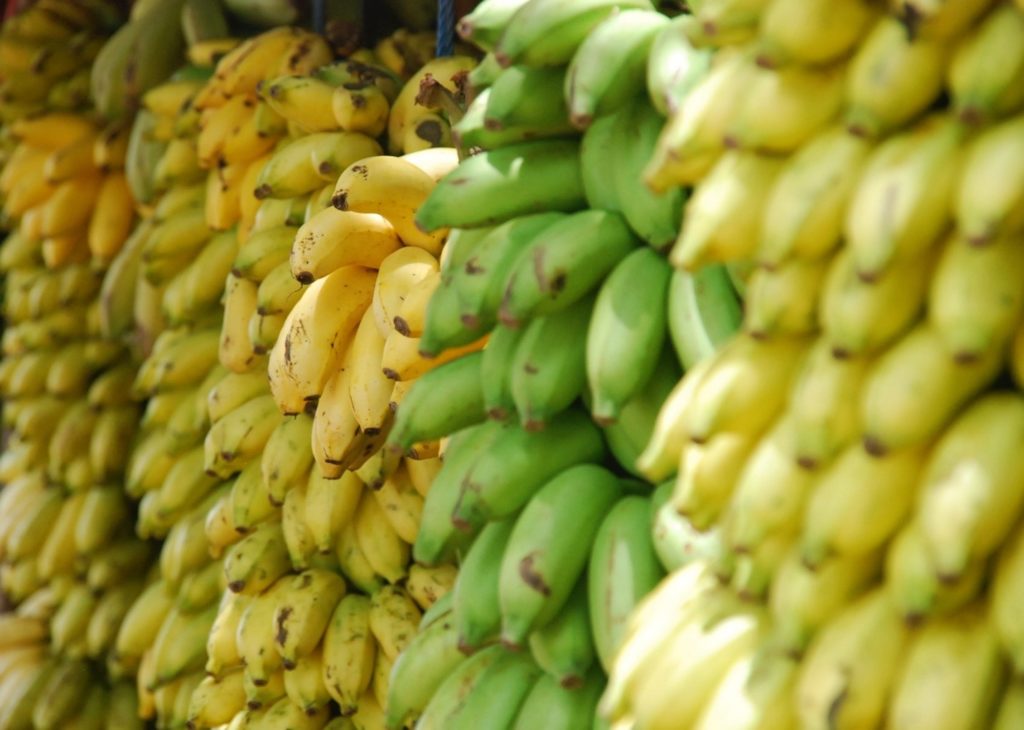 It is no secret that bananas are delicious. Eat them by themselves, blend them in a smoothie, bake them in bread… the options are endless. In addition to tasting fantastic, they are also incredibly good for your health and one of the best natural sources of fiber. Today we are exploring the reasons why you should eat more bananas, explaining some of their health benefits, and giving you a couple delicious easy banana-based recipes!

The four main benefits of fiber

The benefits of fiber are incredible and everyone should make an effort to incorporate more of it into their diet. There are a lot of great reasons to eat more fiber but here are the top four:

When you eat foods high in fiber, such as bananas and whole grains, the sugar in those foods is absorbed slower, which keeps your blood glucose levels from rising too fast. This is good for you because spikes in glucose fall rapidly. When these falls occur it you may feel hungrier than you actually are and resort to overeating.

When you eat foods rich in insoluble fiber, it moves faster through your intestines, which can help signal that you are full, this again prevents overeating.

Fiber has long had a reputation in helping clean your colon. The fiber will scrub out bacteria and other buildup in your intestines, and reduce your risk for colon cancer.

The Two Types of Fiber

Fiber comes in two varieties, soluble and insoluble, and both are favorable for your health. A medium banana that contains 3.1 grams of fiber is made up of 1 gram of soluble fiber and 2.1 grams of insoluble fiber. Soluble fiber dissolves in water and slows digestion, helping to lower glucose levels and cholesterol. Insoluble fiber doesn’t dissolve in water and helps move food through your digestive system.

Fiber, Bananas, and You

It is recommended that you aim for 25 to 30 grams of total fiber a day and 6 to 8 grams of soluble fiber. One banana meets about 10 percent of your daily fiber and soluble fiber needs. This makes it an incredible source for your health and an easy and effective way to get your recommended dose of fiber. There is no confirmed data on how much fiber Americans currently consume, but it’s widely agreed that most Americans only meet about half their daily fiber needs. It is safe to say then, that adding in a banana to your daily diet will help boost your fiber intake and get you on track.

What’s So Great About Soluble Fiber

If you have high cholesterol, you may already know one of the benefits of eating more soluble-fiber rich foods like bananas is that it helps lower cholesterol levels. But that’s not it’s only benefit. The soluble fiber in the banana absorbs water in your gut, which then forms a type of gel. This gel slows down digestion, which keeps you feeling full, slows the stream of sugar into your blood and lowers insulin levels. The insoluble fiber, or roughage, in the banana adds bulk to your stool, which might make it easier for you to go.

In general, it is recommended by doctors and nutrients to have your most fiber heavy meal in the morning or early afternoon. Because of that we are offering you a few easy, healthy breakfast recipes that star your favorite source of fiber, the banana! 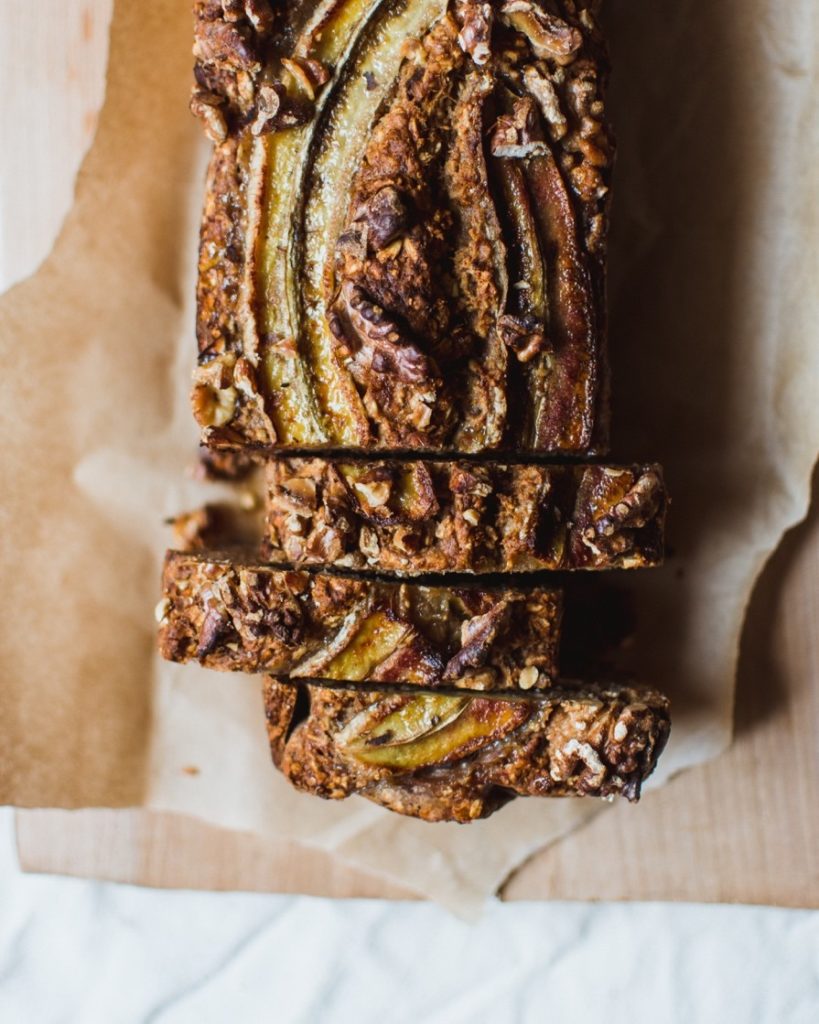 4. Spread batter into a loaf pan coated with cooking spray. Bake at 350°F for about 45-50 minutes or until toothpick comes out clean. Let cool 10 minutes before removing from pan, and cool completely before slicing. 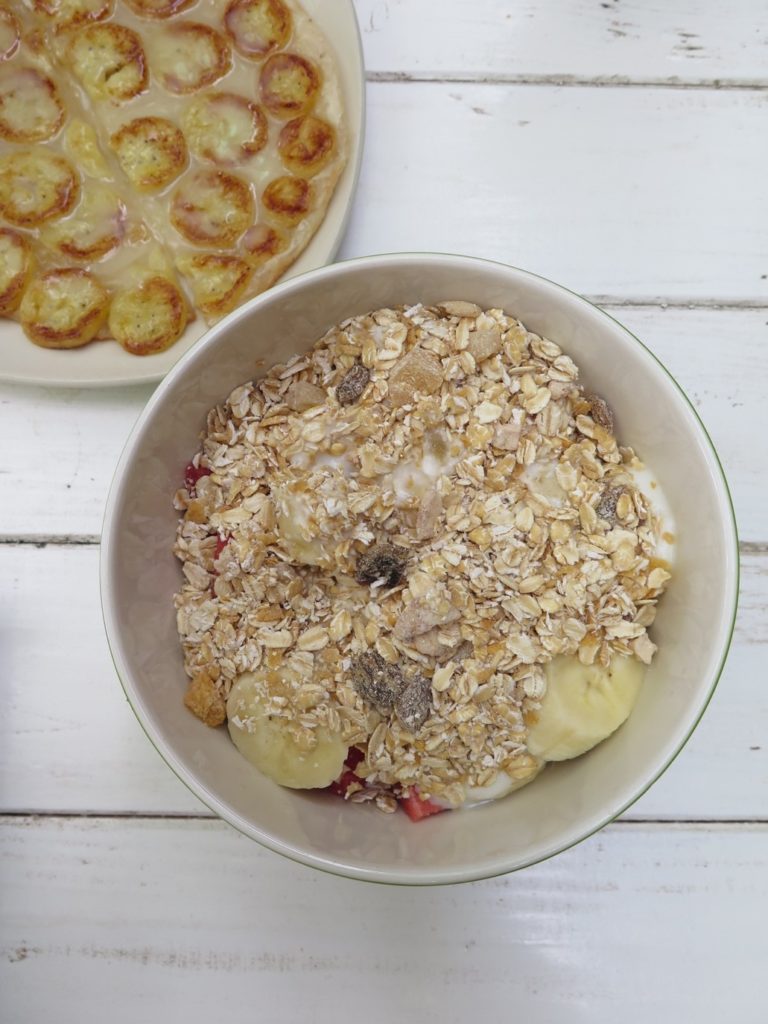 At Organics Unlimited we are big believers in the power of bananas and all the health benefits they provide. We are dedicated in producing the best organic, free trade bananas in the market and are proud to share them with our customers. Read more about our farms and follow us on Instagram for more banana facts, recipes, and information.