GROW by Organics Unlimited is proud to report that the Power Your Lunchbox campaign by Produce for Kids held August 8 to September 23, 2016 was a huge success! This was the third year in a row that GROW has partnered with Produce for Kids for this worthy cause. The campaign encouraged families and individuals to take a pledge to pack healthier lunch items during the back-to-school season, including GROW organic bananas and other participating healthy brands. For each pledge, Organics Unlimited and other sponsor brands made a donation to Feeding America® children’s programs that focus on health and wellness across the country. Retailers, media and trade organizations were able to support and promote the campaign through activities such as a Twitter party (which got 14.6 million views) and by sharing the message of GROW during the Power Your Lunchbox campaign through social media. END_OF_DOCUMENT_TOKEN_TO_BE_REPLACED

This past weekend, Organics Unlimited joined thousands of other produce and floral aficionados at the Produce Marketing Association’s Fresh Summit 2016, an annual trade show for all things produce-related. For this year’s show, Organics Unlimited traveled to Orlando, Florida, where they joined a record number of participants; over 28,000 attendees and more than 11,000 exhibitors! END_OF_DOCUMENT_TOKEN_TO_BE_REPLACED 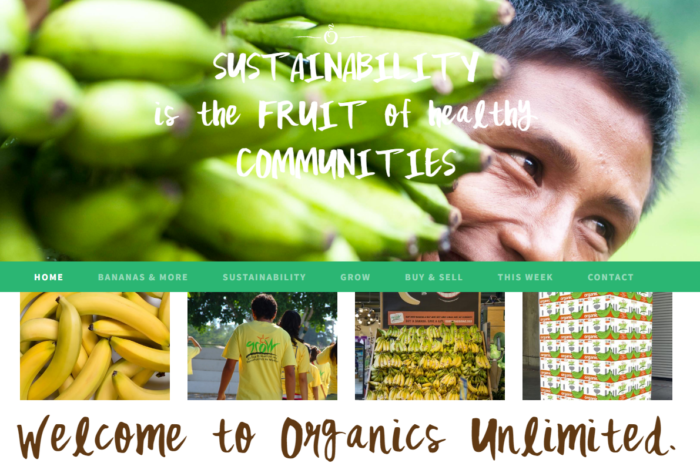 SAN DIEGO (Oct. 13, 2016) – Organics Unlimited is proud to debut a new online look for the organic banana company. An updated website, organicsunlimited.com, is one of the final components of an overall brand refresh that began rolling out in July 2016.

Launched in the beginning of October, the website serves as a portal for both the Organics Unlimited and GROW labels, allowing visitors to learn more about the company’s organic bananas, plantains and coconuts. The new website launched in time for retailers and distributors to experience it while preparing for the 2016 Produce Marketing Association’s (PMA) Fresh Summit, where they will see the same look and messaging in the newly designed trade show booth.